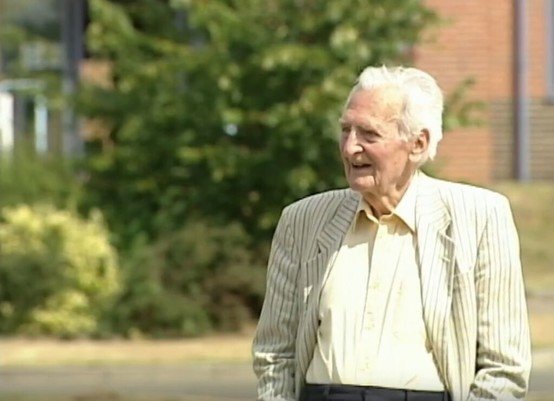 Sir Richard Doll was born on October 28, 1912 in Hampton on the fringe of London, son of a general practitioner and a concert pianist. He had no ability for music, but found he had a flair for mathematics and intended to study it at Cambridge. An accident, however, deflected his aim and he studied medicine instead at Thomas' Hospital Medical School, London. He qualified in 1937 and obtained membership of the Royal College of Physicians two years later. After 6 years war service in the Royal Army Medicine Corps he obtained an appointment with the Medical Research Council to help Dr (subsequently Sir) Francis Avery Jones in a study of occupational factors as possible causes of gastric and duodenal ulcers and has continued in medical research ever since. Doll worked with Professor (later Sir) Austin Bradford Hill in the Medical Research Council's Statistical Research Unit at the London School of Hygiene and Tropical Medicine (1948-62) and after Sir Austin's retirement he directed the Unit (1962-69). Subsequently he was able to conduct research whilst Regius Professor of Medicine at Oxford (1969-79) and warden of Green College (1979-83) and, after retirement, as an honorary member of Sir Richard Peto's Epidemiological Studies Unit in the same University.

Two topics constituted subjects of research throughout: the effects of smoking since 1948 and of ionizing radiation since 1955. Research on smoking began as part of a study to find the reason for the enormous increase in the UK mortality from lung cancer that had occurred since the first decade of the 20th century. A case-control study found that cigarette smoking was an important cause of the disease and the increase in cigarette smoking, combined with improved diagnosis, could account for the increase in mortality. Few people however, accepted the conclusion and a new study of a different type began in 1951 in which information was obtained about people's smoking habits and these were linked to their subsequent mortality. The results soon confirmed the earlier findings and showed that the risk of the disease was proportional to the amount smoked. Surprisingly, with the passing of time, other diseases also began to be linked to smoking, and the study was continued with periodic update of the subjects' smoking habits, for 50 years. By then some 20 other diseases were found to be caused by smoking. Moreover the mortality of continuing cigarette smokers was found to be more than double that of life-long non-smokers throughout middle and old age and the risk was found to be reduced when smoking was stopped, being almost eliminated if it was stopped before 40 years of age.

Research on ionizing radiation was begun in 1955 in response to the Medical Research Council's request following the first test explosion of a hydrogen bomb which caused radioactive fallout throughout the Northern Hemisphere. More than 13,000 patients irradiated for ankylosing spondylitis were identified, estimates made of the doses they received in different tissues, and their subsequent mortality related to the doses received. The first results showed that the risk of leukaemia was proportional to the dose to the bone marrow and suggested that there might be no threshold below which no effect was produced. Later results confirmed the first and also showed that cancer was produced similarly in other irradiated tissues.

Other work showed the reduction in the mortality of radiologists as protection was improved and provided an estimate of the risk of lung cancer associated with the concentration or radon gas that accumulated in houses.

Two other major projects were to determine the effects of steroid contraceptives and to quantify the effect of exposure to asbestos. The first was begun when occasional cases of pulmonary embolism were reported after their use. A case-control study showed that the risk of deep vein thrombosis (leading to a risk of pulmonary embolism) was increased about fourfold by the use of these contraceptives, dependent on the dose of oestrogen. The study was extended to show a smaller effect on the risk of coronary and cerebral thromboses. A follow up study was then designed to obtain a balance of risk and benefit, which was continued by Professor Vessey. The second, on asbestos, was a successor to Doll's demonstration that asbestos caused a substantial risk of lung cancer. It was carried out over many years with the help of Julian Peto and a concerned industry and eventually provided a quantitative estimate of the risk per unit exposure to chrysotile (white asbestos) fibres in the air. Other research included quantification of the occupational hazards of the refining of nickel ore and exposure to coal tar fumes in the coal gas industry, the effect of immunosuppression in patients receiving renal transplants, and demonstration of the infective origin of cervical cancer.

Doll's most important work when in Oxford was however, the review of the causes of cancer that he carried out with Richard Peto at the request of the US Office of Technology Assessment, which laid to rest the claim, commonly made at the time in the US that most cases were caused by occupational hazards or chemical pollution of air, food and water. The review demonstrated the greater importance of smoking, alcohol, infection and diet.

In the last 15 years Doll initiated and chaired for most of the time two committees: one that reviewed, on behalf of the National Radiological Protection Board, the effects of non-ionizing radiation and another that organized a case-control study of the causes of childhood cancer that included all eligible cases in the whole of Britain over a period of 4-5 years. He retired from both in 2003, but their work continues.

Doll has served on many national and international committees and received many awards, but nothing in his life was so important to him as his marriage in 1948 to Joan Mary Faulkner (nee Blatchford) who worked for the Medical Research Council as a research administrator for 35 years and died suddenly and peacefully on October 22, 2001.