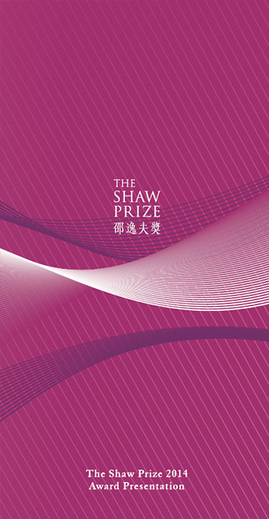 Science in different fields made great progress in the twentieth century. But this progress also brought about unprecedented difficulties for mankind in the twenty-first century. Recognizing this Mr Shaw decided a dozen years ago to found the Shaw Prizes in three scientific fields to encourage and foster scientific research to help address these difficult problems for mankind. Tonight, at this first Shaw Prize Award Ceremony after Mr Shaw passed away at age one hundred and seven, it is appropriate for us to pay respect to the generosity, foresight and vision of this great philanthropist. We will continue following him in spirit and expand the horizons of his vision through the Shaw Prizes.

Shaw Prizes are awarded in three scientific fields: Astronomy, Life Science and Medicine, and Mathematical Sciences. These are among the scientific fields that enjoy vigorous and vibrant progress in recent years. Tonight we shall honour six scientists in these three fields for their distinguished contributions. They are Professors Eisenstein, Cole and Peacock in Astronomy; Professors Mori and Walter in Life Science and Medicine; and Professor Lusztig in Mathematical Sciences.

The early universe was hot and dense. Baryonic matter was highly ionized and consisted of bare nuclei and free electrons, a state known as plasma.

Then as now, photons were far more numerous than either nuclei or electrons. As a consequence of photon-electron scattering, the plasma and photons were tightly coupled into a single fluid whose pressure opposed gravity. This situation pertained during the first 400,000 years after the big bang. At that point the temperature had dropped to 3000 kelvin, the electrons and nuclei combined into neutral atoms which decoupled from the photons, and baryonic matter fell into gravitational potential wells of the dominant dark matter.

Primordial density perturbations on all scales arose shortly after the big bang and latter seeded the formation of structure from galaxies to superclusters. The density perturbations excited baryon acoustic waves, essentially sound waves, that propagated through the primordial plasma at about half the speed of light prior to decoupling. After decoupling, these waves ceased propagating, thereby imprinting a well-defined length scale of about 500 million light years on matter density correlations at the current epoch.

The BAO scale provides a “standard ruler” with many applications in cosmology. It was first observed in temperature fluctuations of the cosmic microwave background on an angular scale of one degree. In 2005, two papers reported its detection in the spatial correlation of galaxies. Oriented perpendicular to the line of sight, the angle subtended by the ruler calibrates the relation between distance and redshift. Oriented parallel, it determines the Hubble parameter as a function of redshift. By now the BAO has confirmed the astonishing discovery, made by using type Ia supernovae as “standard candles”, that the expansion of the universe recently transitioned from deceleration to acceleration.

Next some remarks about redshift-space distortions (RSD). A galaxy’s red-shift provides an estimate for its distance, but one that is contaminated by the radial component of the galaxy’s peculiar velocity with respect to the regular (Hubble) expansion of the universe. Density inhomogeneities and peculiar velocities go hand in hand. The former are the source of gravitational perturbations that excite the latter. Peculiar velocities then act to enhance the density fluctuations that caused them in the first place. This feedback loop describes gravitational instability, the mechanism by which tiny seeds planted in the early universe grew. It was recognized long ago that correlating density fluctuations and peculiar velocities would reveal the mean mass density of the universe. Accomplishing this had to wait until data from large redshift surveys became available at the turn of this century. Images of galaxy fields enable the determination of angular fluctuations in the number density of galaxies. Information about fluctuations along the line of sight is more difficult to come by. The contamination of the redshift-distance relation by peculiar velocities poses an insurmountable problem to surveying individual density fluctuations along lines of sight. To put this in perspective, consider how a spherical cluster of galaxies affects its environment. The more distant galaxies would still be expanding away from the cluster, but at a slightly reduced rate. As a consequence, there would be a small enhancement in their number density. Contours of fixed number density, which in real space are spherical, in redshift space would appear squashed into spheroids with their short axes oriented along the line of sight. Although real-space shapes of individual density fluctuations cannot be deduced from their redshift-space shapes, a statistical determination of the relation between the two follows from the assumption that the real-space shapes are isotropically oriented.

Now two comments on the synergy of the BAO and RSD. Both test the theory of gravitational structure formation, the former by showing how a feature is preserved as the universe expands by a factor of 103 and the latter by measuring how structure is presently growing. Moreover, large-scale flows of galaxies distort the BAO “standard ruler”, an effect that is substantially mitigated by simulating the flows based on the gravitational field deduced from observations of large-scale structure. This procedure, referred to as reconstruction, straightens out the ruler.

Proteins, the building blocks of all organisms, are constantly being synthesized inside cells. But when they are first made, they arelinear chains of amino acids known as polypeptides. These chains must fold into proper three-dimensional shapes before they can function properly. Over research careers spanning over two decades, Professor Kazutoshi Mori of Kyoto University and Peter Walter of the University of California, San Francisco, and their colleagues identified molecular pathways that guide these processes and assure their accuracy.

To undergo folding, about one-third of newly synthesized polypeptide chains enter a structure in the cell called the endoplasmic reticulum (or ER for short), which is a first station as a checkpoint; only well-folded proteins are allowed to exit the ER to be shuttled to their destinations.  In this way, the cell ascertains it has only properly working protein machines to sense and communicate with other cells in the organism.

For the ER to work optimally it must have adequate capacity to keep up with the rate of protein synthesis. If too little ER is present to handle the number of proteins being synthesized a logjam of misfolded proteins ensues within the ER, a state known as ER stress.

In the early 1990s, Walter and Mori in studying yeast, independently determined that a sensor molecule embedded in the ER membrane called Ire1 detects ER stress. Ire1 then sends a signal to the cell nucleus that prompts the expression of other genes to help the cell regain equilibrium. Ire1 was the first molecule discovered and led the way of discovery of a complex cascade of parallel interwoven pathways in animal and human cells, collectively called the Unfolded Protein Response (or UPR) that temporarily slow down protein synthesis and simultaneously increase the abundance of ER. In this way, the cell constantly balances its protein load and folding capacity.

Unfolded proteins can be a menace. If a cell’s balance between ER abundance and protein synthesis cannot be restored fairly quickly, the UPR shifts to a signaling mode that causes the cell to die. Therefore, uncontrolled ER stress can cause diseases.  For example, in retinitis pigmentosa, misfolded proteins exceed the UPR, inducing eye’s retinal cell death and blindness. In type II diabetes, a continual demand for insulin can overwhelm the ER and cause the death of in the insulin producing cells. And in neurodegenerative diseases, such as Parkinson’s and Alzheimer’s disease, insufficient UPR from ER stress may kill neurons as protein aggregates accumulate.

On the other hand, the UPR cell-protective role may be hijacked by some viruses to create additional ER aiding their own replication. Cancer cells may also take advantage of the UPR to aid their own proliferation. Thus, the initial discoveries by Mori and Walter in baker yeast have laid the foundation for protein quality control that are fundamental in mammalian cells of all kind and hold promise to new therapeutic strategies in diseases.

Professor Peter Sarnak whose is the Chair of the Mathematical Sciences Selection Committee cannot be here, so he asked me to represent him and give this introduction to the work of the Mathematical Sciences 2014 Laureate Professor George Lusztig. This is for me a special honour and pleasure not only for my admiration of the great mathematical achievements of George Lusztig but also because I was his student, probably his first student.

Lustig’s work on representation theory, the study of how to realise an algebraic structure, such as group or algebra, in terms of linear transformations of a linear space, has completely revolutionised this subject and furthermore has changed a lot of the mathematics surrounding it. His work combines sophisticated techniques, a remarkable ingenuity, an amazing combinatorial insight and the capability and patience of performing very intricate computations.

After some early work in topology, Lusztig started working in representation theory in 1973.

His first concern has been the study of representations of finite Chevalley groups.  This is a monumental work which kept him busy until recent times. After publishing a book regarding the general linear group, in his 1976 work in collaboration with Deligne, Lusztig constructs a large class of representations using completely new methods for the subject such l-adic cohomology of a class of algebraic varieties now called Deligne–Lusztig varieties. To understand the incredible insight of Lusztig, let me quote a recent interview by Deligne “Lusztig had the whole picture of how to use l-adic cohomology for group representations, but he did not know the techniques. I knew the technical aspect of l-adic co-homology and I could give him the tools he needed.”

In subsequent work, Lusztig has been able to completely classify irreducible characters of such groups and give an algorithmic procedure to compute them. For obtaining this he has introduced an impressive number of new tools such as the theory of character sheaves, and that of the canonical basis for the Hecke algebras of the Weyl group.

This last subject deserves a further comment. In 1979, Kazhdan and Lusztig introduced in a completely combinatorial way a basis for the Hecke algebra (a sort of quantum deformation of the group algebra) of a reflection group. Even considering the case of the symmetric group of permutations, this is the probably the most remarkable advance in the subject since the introduction of the Young tableaux. They remarked that this basis had properties related to the topology of certain spaces (Schubert varieties) and to the algebra of a certain class of representation. They formalised these facts in a precise dictionary (the Kazhdan–Lusztig conjecture) which was proved for the topological part by Kazhdan Lusztig themselves and for the algebraic part by Beilinson–Bernstein and Brilinsky–Kashiwara independently through the theory of D-modules (differential systems of equations with analytic coefficients).

This set of ideas has had an enormous influence on the study of the topology of algebraic varieties and furthermore became a paradigm which Lusztig has used repeatedly to discover many kinds of different phenomena in representation theory.

There is no time here to cover more of Lusztig career which spans over 4 decades. As a last theme let me mention his contributions to the theory of quantum groups originally defined by Jimbo and Drinfeld inspired by the study of quantum integrable systems. Lusztig was able not only to deduce an impressive number of results internal to the theory but also to use it to deduce certain important more classical results. For example the definition of a canonical basis for the irreducible representations of a compact Lie group.

On behalf of Professor Peter Sarnak and the rest of the Selection Committee we wish to congratulate Profesor George Lusztig.

All Events in 2021Back to Event Listing