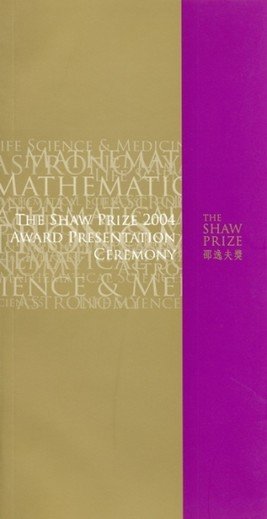 It gives me great pleasure to join you at the inaugural Shaw Prize Award Presentation Ceremony. Gathered here to celebrate this remarkable event are renowned scholars and scientists from all over the world. For friends who have flown a long way through many time zones to our city, Hong Kong would like to extend our warmest welcome to you.

Today, the Shaw Prize will give recognition to six distinguished scientists in the areas of astronomy, life science and medicine, and mathematical sciences. On this very special occasion, I would like to offer my heartfelt congratulations to Prof P. James E. Peebles, Prof Stanley N. Cohen, Prof Herbert W. Boyer, Prof Yuet-Wai Kan, Sir Richard Doll and Prof Shiing-Shen Chern.

Needless to say, they are all top-class scientists who have made significant contributions to the advancement of civilisation. They are in the footsteps of generations of scientists who have made fascinating discoveries, without whom many of the applications that we would take for granted today could only remain as dreams. As we read about their exciting stories and admire their achievements, we cannot help but ask: how did they make it?

Discovery invariably starts with questioning: questioning the already known, the well-accepted and the status quo. But it does not stop at raising questions. Sparked off by a critical mind, it has to be fuelled by an unflinching passion for knowledge and truth, and is sustainable only by the utmost perseverance and courage.

The road to discovery can never be taken for granted. We need firm and sustained investments in building up an optimal pool of talents, a stimulating research environment, plus the right institutional process to translate scientific discoveries into technological breakthroughs that change the world. It is here that the Government can and should play an active role and create an environment conducive to such pursuits.

Education as the key to success

The Hong Kong Special Administrative Region Government has placed utmost value on education as an investment in human capital. It has been one of our top priorities, and the single largest item of public expenditure. We look to education to impart knowledge, inspire hearts and minds, and help people realise their potentials. Education also helps individual develop core values which will guide them for life as they rise up to new challenges of an ever-changing world.

No education system can be complete without a strong research culture. Thanks to our universities, researchers and scientists, we have laid a solid foundation for research work in Hong Kong. As Hong Kong aspires to be the regional education hub, we must work even harder to develop areas of excellence within the education system. While the Government will continue to invest in research activities, we also look to private sector enterprises, charitable trusts and foundations to contribute to this worthwhile cause.

Ladies and gentlemen, tonight, we are gathering here not only to congratulate the six prize winners, but also to say thank you to Sir Run Run. Sir Run Run, a well-known figure around the world, is not only a legend in media and film industry but also a very much respected benefactor. Year after year, Sir Run Run makes countless donations to Hong Kong, the Mainland and to many parts of the world in promoting education, scientific and technological research, medical and social welfare services, and culture and art. The Shaw Prize, which is being awarded tonight, is widely recognised as the "Nobel Prize of the East". The Prize honours individuals who have achieved significant breakthrough in academic and scientific research and gives encouragement to the great talents who have profound impact on mankind. I know Sir Run Run's generous contribution through the Shaw Prize will spur both the government and the community to be even more committed to investment in education generally and in research work in the areas of science, technology and medicine specifically.

Before closing, I would like to congratulate again the six prize winners. You have won the international acclaim that you well deserve, and have set examples for young people who wish to join you in the league of leading scientists. I truly appreciate the profound impact that your work has made on mankind, and wish you great success in your future endeavours.

Thank you very much.