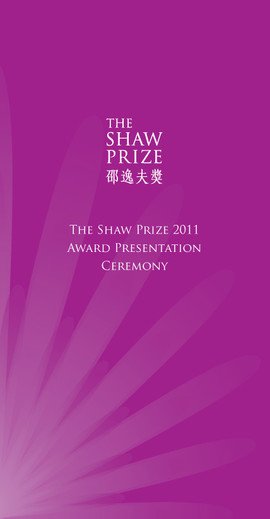 Tonight, we shall award 3 Shaw Prizes to seven scientists for their distinguished contributions to Astronomy, Life Sciences and Medicine, and the Mathematical Sciences.

The first Shaw Prize Award Ceremony took place in 2004. Since that time, including this year’s awards, there had been 25 Shaw Prizes awarded to 40 scientists in three fields.

Astronomy is the most ancient of all natural sciences. Indeed Isaac Newton, who gave birth to modern science, had based his great tome on the works of earlier astronomers Tycho Brahe and Johannes Kepler. In the twentieth century the field had gone through explosive growth, producing unbelievably mysterious and awesome discoveries so that today astronomy is the field that draws more freshmen students than any other scientific disciplines.

Life Sciences and Medicine likewise had gone through stunning revolutions in the twentieth century, starting with the discoveries of insulin and antibiotics, followed by the double helix, the gene to protein dogma, and all subsequent miraculous understanding of various aspects of the molecular basic of life.

Mathematical Sciences also enjoyed vigorous growth in the twentieth century, both in depth and in breadth. Difficult old problems were solved, and contacts with neighbouring disciplines, especially physics and astronomy, produced new insights about the structure of the universe, both in the large and in the small.

The Shaw Prize is proud to play a role in recognizing revolutionary advances in these vibrant and productive areas of scientific research.

The Shaw Prize in Astronomy 2011 is awarded in equal shares to Enrico Costa and Gerald Fishman for their leadership of space missions that enabled the demonstration of the cosmological origin of gamma ray bursts.

Gamma ray bursts (GRBs) were first detected serendipitously in 1967 by gamma ray detectors aboard the Vela satellites, and were announced by Klebesadel et al. in 1973. Work by Gerald Fishman and Enrico Costa in the last two decades have demonstrated that GRBs are of cosmological origin, and are the brightest sources known in the universe.

GRBs are intense flashes of gamma rays emanating from cosmic sources lasting for a few seconds to minutes. During the flash, a GRB outshines any stars and any galaxies in the universe. They appear so bright because they emit narrow beams of relativistic particles, and are observed when these beams directed toward Earth. There are at least two distinct types of GRBs. The long-duration bursts are associated with rare types of supernova explosions and may be caused by the formation of a black hole at the center of a collapsing massive star. The short-duration bursts may be caused by the merger of two neutron stars.

The GRB sources manifest some of the most extreme physical environments in the cosmos. The ongoing study of GRBs is one of the most exciting fields of astrophysics today.

Gerald Fishman was Principal Investigator of the BATSE experiment, aboard the Compton Gamma Ray Observatory. The experiment detected thousands of GRBs  distributed nearly uniformly in the sky, a strong evidence that the sources of GRBs are located at cosmological distances, far beyond the Milky Way galaxy.

For these outstanding achievements, Enrico Costa and Gerald Fishman are awarded the 2011 Shaw Prize in Astronomy.

The 2011 Shaw Prize in Life Science and Medicine is awarded to three scientists who have done path-breaking work that established the mechanisms of the innate immune system ‘that provies immediate response to infection.

Jules Hoffmann at the University of Strasbourg was mindful that the innate immune system is evolutionarily ancient. He studied the fruit fly, and identified mutations that prevented it from making a protective immune response to the fungus, Aspergillus fumagatus.  He showed that antifungal immunity depended on the activation of a surface molecule called Toll previously known only for its role in establishing the orientation of the fly embryo but entirely unexpected for its role in innate immunity  This discovery immediately attracted the attention of scientists working on the innate immune responses of higher animals including human.

Ruslan Medzhitov of Yale University and his then research mentor Charles A. Janeway, Jr. recognized that humans might have a similar system for the innate immune response.  They asked whether there were human molecules that resembled Drosophila Toll.  By searching a database of human genes, they found a human homolog of Toll that is now called a Toll-like receptor, TLR.  Medzhitov showed that stimulation of the human TLR caused the production of a series cytokines that were capable of initiating immediate inflammatory responses to mobilize cells to eliminate pathogens.

Bruce Beutler of the University of Texas Southwestern Medical School made the key contribution on what molecules stimulate TLRs.  In certain mutant mouse strains that were unable to respond to the endotoxin lipopolysaccharide, LPS, he showed that the mutant gene was precisely the TLR gene that Medzhitov and Janeway had identified.  Beutler’s work established the paradigm that common bacterial products, and later viral and parasite products, mediated their activation of innate immunity by being recognized by TLRs and other sensors of the innate immune system.

As in recent years, many outstanding and worthy nominations were made this year for the Shaw Prize in Mathematical Sciences. However, two names – Demetrios Christodoulou and Richard Hamilton – quickly rose to the top. The primary works of both involve the global behavior of nonlinear evolution equations in geometry, a large and active area in modern mathematics and mathematical physics. The central theme of their work is the formation of singularities for geometric evolution equations, a crucial question in general relativity or Riemannian geometry.

Demetrios's contributions are in mathematical physics – in particular, partial differential equations describing physical phenomena. His study of the behavior of solutions to Einstein's equations in general relativity has shaped our understanding of the formation of singularities such as black holes, as well as basic issues such as the stability of the Minkowski-space time. He is unique in having a deep understanding and intuition about the underlying physics while at the same time being a brilliant (mathematical) analyst. This combination of traits has led him to rigorous treatments and discoveries of unexpected phenomena. Along the way he has solved problems that had resisted progress for many years.

Richard has made many contributions to geometric analysis. In particular, his Ricci Flow, introduced to describe low-dimensional positively curved spaces, is one of the great gifts to modern mathematics. Over the past three decades Richard has led the way by developing a host of techniques to study the long-time behavior of his Ricci flow and to deal with singularities. His ideas have led to many results in geometry, topology, and the physics connected with curvature flows. The most spectacular of these is Grigori Perelman's proof of Thurston's Geometrization Conjectures (including Poincare' as a special case), which builds on Richard's theory of Ricci flow. The resulting classification of three-dimensional shapes constitutes one of the finest achievements in mathematics.

To sum up, the profound and innovative works of Demetrios and Richard are very hard-earned, achieved only by sticking to their ideas and beliefs over a long period of time. Their efforts are an inspiration to us all.