The early universe was hot and dense. Baryonic matter was highly ionized and consisted of bare nuclei and free electrons, a state known as plasma.  Then as now, photons were far more numerous than either nuclei or electrons.  As a consequence of photon-electron scattering, the plasma and photons were tightly coupled into a single fluid whose pressure opposed gravity. This situation pertained during the first 400,000 years after the big bang. At that point the temperature had dropped to 3000 kelvin, the electrons and nuclei combined into neutral atoms which decoupled from the photons, and baryonic matter fell into gravitational potential wells of the dominant dark matter.

Primordial density perturbations on all scales arose shortly after the big bang and later seeded the formation of structure from galaxies to superclusters. The density perturbations excited baryon acoustic waves, essentially sound waves, that propagated through the primordial plasma at about half the speed of light prior to decoupling. After decoupling, these waves ceased propagating, thereby imprinting a well-defined length scale of about 500 million light years on matter density correlations at the current epoch.

The BAO scale provides a “standard ruler” with many applications in cosmology. It was first observed in temperature fluctuations of the cosmic microwave background on an angular scale of one degree. In 2005, two papers reported its detection in the spatial correlation of galaxies. Oriented perpendicular to the line of sight, the angle subtended by the ruler calibrates the relation between distance and redshift. Oriented parallel, it determines the Hubble parameter as a function of redshift. By now the BAO has confirmed the astonishing discovery, made by using type Ia supernovae as “standard candles”, that the expansion of the universe recently transitioned from deceleration to acceleration.

Next some remarks about redshift-space distortions (RSD). A galaxy’s red-shift provides an estimate for its distance, but one that is contaminated by the radial component of the galaxy’s peculiar velocity with respect to the regular (Hubble) expansion of the universe. Density inhomogeneities and peculiar velocities go hand in hand. The former are the source of gravitational perturbations that excite the latter. Peculiar velocities then act to enhance the density fluctuations that caused them in the first place. This feedback loop describes gravitational instability, the mechanism by which tiny seeds planted in the early universe grew. It was recognized long ago that correlating density fluctuations and peculiar velocities would reveal the mean mass density of the universe. Accomplishing this had to wait until data from large redshift surveys became available at the turn of this century. Images of galaxy fields enable the determination of angular fluctuations in the number density of galaxies. Information about fluctuations along the line of sight is more difficult to come by. The contamination of the redshift-distance relation by peculiar velocities poses an insurmountable problem to surveying individual density fluctuations along lines of sight. To put this in perspective, consider how a spherical cluster of galaxies affects its environment. The more distant galaxies would still be expanding away from the cluster, but at a slightly reduced rate. As a consequence, there would be a small enhancement in their number density. Contours of fixed number density, which in real space are spherical, in redshift space would appear squashed into spheroids with their short axes oriented along the line of sight. Although real-space shapes of individual density fluctuations cannot be deduced from their redshift-space shapes, a statistical determination of the relation between the two follows from the assumption that the real-space shapes are isotropically oriented. 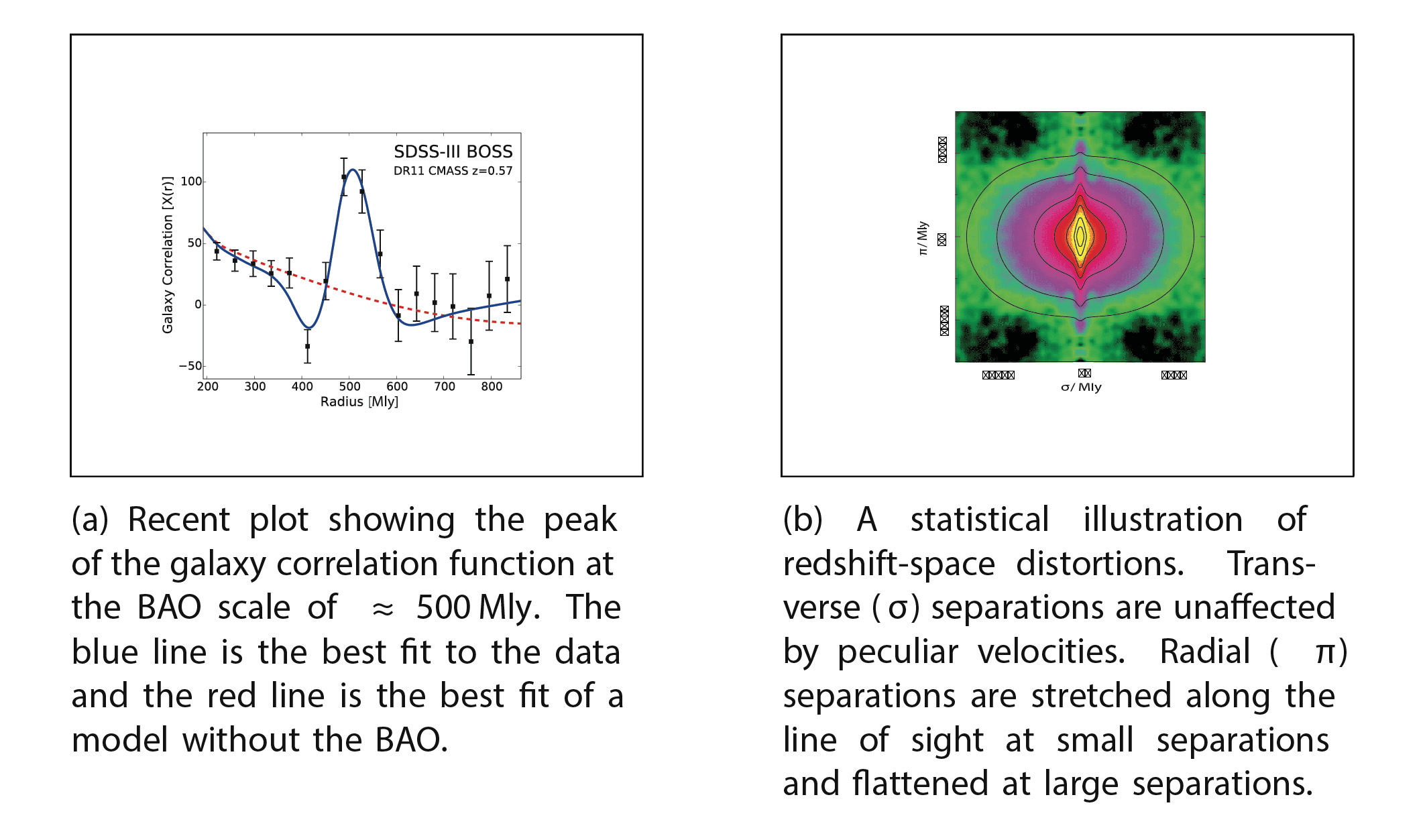 Now two comments on the synergy of the BAO and RSD. Both test the theory of gravitational structure formation, the former by showing how a feature is preserved as the universe expands by a factor of 103 and the latter by measuring how structure is presently growing. Moreover, large-scale flows of galaxies distort the BAO “standard ruler”, an effect that is substantially mitigated by simulating the flows based on the gravitational field deduced from observations of large-scale structure. This procedure, referred to as reconstruction, straightens out the ruler.