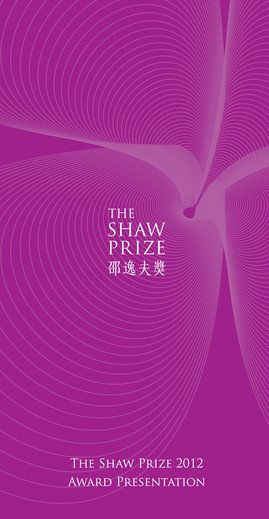 The first Shaw Prize ceremony took place in 2004. In the eight years up to tonight, twenty-five Prizes have been awarded to forty-three scientists in three different fields: Astronomy, Life Science and Medicine, and Mathematical Sciences. These three fields represent active, productive and extremely exciting research areas that have tremendous potential for discoveries beneficial to mankind in the 21st Century and beyond, as I outlined briefly at last year’s ceremony.

Tonight, the Shaw Prize is proud to present the Shaw Prizes of 2012 to five scientists in these three fields. With this presentation we are happy to have among our distinguished group of forty-eight Laureates the first female Shaw Prize winner.

Sir Run Run, Honored Guests, Ladies and Gentlemen. The Shaw Prize in Astronomy for 2012 is awarded in equal parts to David Jewitt and Jane Luu for their discovery and characterization of the Kuiper belt, an archeological treasure dating back to the formation of the solar system and the long-sought source of short period comets.

Observations of the motion of heavenly bodies date back more than 2,500 years. Nevertheless, as recently as 1992, immediately prior to the detection of the first Kuiper belt objects (KBOs) by Jewitt and Luu, little was known about the contents of the solar system beyond 30 AU. Distances quoted here are relative to the Sun. An AU, short for astronomical unit, is the mean radius of the Earth's orbit about the Sun. Neptune's orbital radius is 30 AU and the nearest stars are at distances of about 150,000 AU. Distant bodies are dim because they reflect little sunlight back to Earth. Moreover, our most powerful telescopes can only image small angular regions at a single pointing. Thus searches for widely-spaced, faint images are tedious and resource intensive. Before Jewitt and Luu's discovery, Pluto and its large satellite Charon were the only directly detected bodies orbiting beyond Neptune.

Comets provide indirect information about reservoirs of bodies beyond 30 AU. Although comets are directly detected only when they come within a few AU, their orbits can be traced back to show where they came from. By 1950 it had been established that most long-period comets are visitors from distances in excess of 10,000 AU and that their orbits are randomly oriented with respect to the mean orbit plane of the solar system. These facts led Jan Oort to hypothesize that comets are stored in an enormous spherical cloud beyond 10,000 AU and that gravitational deflections by nearby stars are responsible for injecting those we detect into the inner solar system. Oort's model is widely accepted and the hypothetical comet cloud carries his name.

After their initial discovery, Jewitt and Luu continued to lead efforts to characterize the spatial distribution and size spectrum of KBOs for more than a decade. As other astronomers joined the hunt, progress accelerated. Now, in the 20th anniversary year of the first discovery, more than 1,400 KBOs have been found. It has been established that the region between 30 and 50 AU is populated by a vast array of icy bodies with tens of thousands having diameters in excess of 100 kilometers. There are even a few whose diameters exceed 1,000 kilometers and one of comparable size to Pluto (diameter 2,000 kilometers) discovered by a team working with Mike Brown. This finding led to Pluto's demotion from its high status as the ninth planet to merely a charter member of a new class of dwarf planets.

A significant fraction of KBOs are trapped in orbital resonances with Neptune. That is, their orbit periods are related to Neptune's by the ratio of two small integers. Pluto is in a 3:2 resonance so Neptune circles the Sun three times while Pluto goes around it twice. As a result of this resonance, Pluto is protected from close approaches to Neptune even though its eccentric orbit crosses Neptune's circular one. By sheer coincidence, a paper by Renu Malhotra proposing that Neptune's outward migration was responsible for the esonant trapping of Pluto's orbit was published in 1993 in Nature, the same year and the same journal in which Jewitt and Luu's seminal article appeared. Other resonances known to have substantial populations include the 2:1, 5:2, 7:4, and 5:1. Similar dynamics apply to all orbital resonances, so Malhotra's proposal has been widely embraced as the explanation for the large fraction of resonant KBOs.

In summary, Jewitt and Luu discovered a new component of the solar system and the source of the short-period comets. KBOs grew by the accretion of solids during the early stages of planet formation until some  undetermined process, probably involving perturbations by Neptune while its orbit evolved, increased their relative velocities to the extent that further accretion could not take place. Owing to their great separations, large KBOs have suffered little collisional evolution since. Thus they offer us a frozen record of the early stages of planet formation. As impressive as progress has been, much unexplored territory remains. Almost nothing is known about the content of the solar system from 100 – 10,000 AU. These and other challenges remain for the future.

Protein molecules are assembled as long chains of amino acids that have to be folded into correct 3 dimensional structures before they can perform their proper functions.  Incorrectly folded proteins not only do not function properly, but may be rapidly degraded, or form harmful aggregates that cause cell damage in some diseases. While the sequence of the amino acids can guide protein folding, additional assistance from other molecules acting as chaperons are often required to shield them from extreme environments within the cell, or to overcome changes or modifications of the amino acids.

The 2012 Shaw Prize in Life Science and Medicine is awarded to Franz-Ulrich Hartl, Director, Max Planck Institute of Biochemistry in Martinsried, Germany and Arthur Horwich, Professor of Genetics, Yale University School of Medicine.  Working separately and in collaboration, they characterized a complex class of chaperon proteins known as chaperonins and their mechanism of action.  Their experiments created a coherent picture of the physiologic, biochemical and biophysical processes that cells use to fold proteins.

In an extraordinary body of work Hartl defined, resolved, and reconstituted the complex pathway by which molecular chaperonins cooperate to fold proteins.  Electron microscopy images taken by him and his colleagues offered the first indication that folding occurs within the cavity of a chaperonin called GroEL, and its lid-shaped cofactor GroES.  A series of ATP-driven conformational steps change the shape of the wall of the chamber to accept an unfolded domain and then closes the chamber to reinforce the folding event.

In 1994 and 1997, together with the late Paul Sigler, Horwich solved the atomic structure of GroEL-GroES complex, which was one of the largest protein complexes solved at the time.  An elegant analysis using mutant GroEL proteins then confirmed that an unfolded protein binds in the center of the hollow cylindrical GroEL complex. The inner cavity of GroEL undergoes a massive conformational change upon GroES binding within which proteins up to about 60,000 daltons in size are free to fold. This structure also identified the mechanism of ATP hydrolysis, allowing his laboratory to work out the reaction cycle.


Through their contributions, investigators now have the understanding of the balance of protein folding, misfolding, and protein degradation that govern normal and abnormal cell functions.  Drugs that target the folding process and stabilize misfolded proteins are being tested for treatment. An example is the treatment of a mutant form of Cystic Fibrosis that may show promise in other genetic diseases. Similarly, the misfolded amyloid peptides that characterize Alzheimer's disease are a potential target for drug therapy to prevent amyloid peptide aggregation that disrupts brain function.  These new approaches to treat diseases of defective protein folding arose from the pioneering work of Hartl, Horwich and others who define the molecular events of protein folding.

From his technical brilliance in solving central mathematical problems to his visionary insights and very original ideas, Maxim Kontsevich has played a major role in shaping modern algebra, algebraic geometry, mathematical physics and especially the connections between these fields.The impact of theoretical physics and in particular string theory on pure mathematical subjects like algebra and geometry is striking and relatively recent, and it has attracted some of the best talents in both physics and mathematics. While many have contributed to these developments, few have had the impact of Kontsevich.

His early work on a conjecture of Witten concerning an unexpected connection between the geometry of the space of Riemann Surfaces and integrable dynamical systems, made him a household name (more accurately in the houses of mathematicians) and he followed this with many brilliant works.

His proof of the existence of the so-called deformation quantization of  Poisson manifolds resolved a foundational  problem in the mathematical theory of quantization. He introduced Motivic Integration, a powerful analogue of the usual integral which takes values in a large ring associated with the collection  of all algebraic varieties. Kontsevich himself used it to resolve some basic questions in birational algebraic geometry and it has become a standard language and tool in various domains including that of counting points on varieties over finite fields and rings.

The discovery by physicists of mirror pairs of Calabi-Yau manifolds has led to a rich and evolving mathematical theory of "mirror symmetry". Physics predicts that there is a relation between the symplectic geometry of a manifold and the complex geometry of its mirror manifold. In special cases this led to striking and very explicit conjectures in classical enumerative geometry.

From the beginning to the present Kontsevich has played a leading role in developing the mathematical  theory of Mirror Symmetry. In particular, his homological mirror symmetry conjecture further enriched the conjectural relations between symplectic and complex geometry of mirror manifolds and became a major driving force  in the development of the theory. This conjecture and its generalizations have been proven in significant special cases.

In his recent work he continues to revisit the original formulation to provide clearer conceptual answers to the mathematical question "What is Mirror Symmetry".

Besides these major achievements Kontsevich has outstanding works in a number of other areas .We are delighted to have been part of the process leading to Kontsevich receiving the 2012 Shaw Prize in The Mathematical Sciences and to congratulate him on this prestigious recognition of his contributions to mathematics.