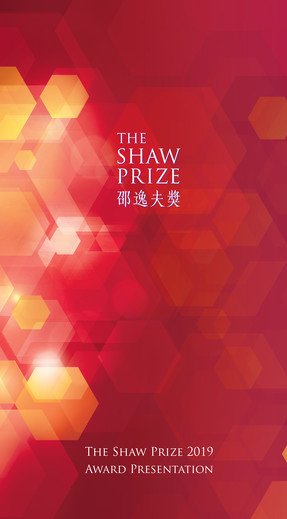 Welcome to the sixteenth annual Shaw Prize Award Presentation Ceremony. In 2002 Sir Run Run Shaw and Mrs Mona Shaw established the Shaw Prize to honour scientists in the fields of Astronomy, Life Science and Medicine, and Mathematical Sciences. The inaugural Award Ceremony took place in 2004. In the ensuing years, the Shaw’s entrepreneurship and philanthropy inspired the quest for knowledge, highlighted outstanding achievements, and became a major force for progress in the world.

Despite the passing of Mr Shaw in 2014 and Mrs Shaw in 2017, the memory of their dedicated purpose and energy continues to inspire Council Members to carry on the founding vision of Mr and Mrs Shaw. Under the direction of the Shaw Prize Foundation, future generations will continue to broaden the Shaw family’s program of advancing knowledge through scientific discoveries, thus strengthening and enhancing the aims of the Shaw Prize.

Tonight, we honour three scientists in the designated fields for their distinguished contributions. They are Professor Edward Stone in Astronomy; Professor Maria Jasin in Life Science and Medicine; and Professor Michel Talagrand in Mathematical Sciences.

One of the longstanding dreams of humanity has been to explore our Solar System by space travel. In his 1865 novel ‘De la terre à la lune’ Jules Verne told the story of members of a “Baltimore Gun Club” building a huge cannon to shoot a projectile with three of the Club’s members onboard, for a trip to and landing on the Moon. About one century later, the USA-Soviet space race of the 1960s turned this dream into reality by developing the necessary technology and providing the resources for such ambitious endeavors. One of the great highlights of this period was the manned lunar landing of Apollo 11 in 1969.

The more distant solar system targets required un-manned missions. Among these the Voyager project stood out as a seminal success. Voyager consists of two spacecraft launched in August/September 1977 to undertake a “grand tour” of the outer solar system. Both spacecraft flew past Jupiter and Saturn in the period 1979-1981. Voyager 2 visited Uranus in 1986, and Neptune in 1989. Voyagers’ high-resolution images of the outer Solar system planets and their moons fascinated all of humanity. Voyager opened fascinating and sometimes strange vistas of new worlds,

Voyager dramatically improved our knowledge of the masses, sizes and shapes of the giant planets and their satellites. Fourty-two years after launch, the spacecrafts are now 145 times as far from us as the Sun, and have become the most distant human artifacts. In 2012 and 2018 they crossed the boundary of the solar system, the heliopause, and crossed into interstellar space.

One of the explicit aims of The Shaw Prize is to recognize advances that have “enriched humanity's spiritual civilization”. Voyager has achieved this goal in a spectacular way. Each spacecraft carries a “golden record” containing sounds and images selected to portray the diversity of life and culture on Earth for whoever out there might find them. In 1990 Voyager 1 looked back to take a famous “family portrait” of the solar system planets including the image of Earth known as the “pale blue dot”, which became a symbol for how small we are in the larger Universe. The mission is unparalleled in its duration and the unique science it has returned. The story of the researchers who devoted their entire careers to Voyager resonates strongly with a wide audience.

The dominant figure of this milestone mission was and is Edward C Stone. He has served as Project Scientist from 1972 to the presentover 45 yearsand is Principal Investigator on one of the spacecraft's 11 instruments. His far-ranging contributions to and leadership of this epochal space mission make Professor Edward C Stone an excellent recipient of the 2019 Shaw Prize in Astronomy.

Molecular biologists have long dreamed of the possibility of treating genetic diseases by correcting mistakes in the genome. After many decades of work in genetic engineering we now have the prospect of precise genome editing tools. The current “CRISPR” revolution involves the application of a DNA breaking enzyme that can be tailored to identify specific chromosomal DNA sequences that may be clipped and then repaired. In the near future, it will be possible to treat human and animal genetic diseases and to improve agricultural productivity by the introduction of specific changes at precise locations within chromosomes .

The history of the discoveries that have given us this exciting prospect stretch back over 25 years to basic work in the mechanism of chromosome recombination in simple organisms such as Baker’s yeast. Yeast geneticists discovered that genome recombination involved the introduction of breaks in the two stands of DNA followed by pairing of homologous sequences between chromosomes to generate genetic diversity. Knowledge of this requirement allowed Rodney Rothstein’s laboratory at Columbia University to design an elegant approach to gene targeting in yeast  a tool that permitted many genetic experiments to test gene function in living yeast cells .

Maria Jasin’s interest in gene editing began when she was a graduate student at the Massachusetts Institute of Technology, where she made her first gene deletion, in the bacterium Escherichia coli, using homologous recombination. During her postdoctoral studies in Zurich and then at Stanford University, Jasin took the bold step of studying gene editing and homologous recombination in mammalian cells, using methods similar to those that had been developed in yeast. These methods showed that the introduction of a double-strand break in an extrachromosomal DNA molecule greatly stimulated its integration at the homologous site in the genome. The problem in mammalian cells was that even though accurate recombination could be achieved, it occurred in a very small fraction of cells against a background of nonspecific interactions .

Jasin’s breakthrough was to take the model for double-strand break repair developed in yeast and make the model work in mammalian cells. In 1994, Jasin’s laboratory exploited an ingenious method to create a double-strand break in the mouse genome. To do this, she used a specialized DNA breaking enzyme from yeast that had a well characterized DNA recognition sequence. The gene encoding the yeast enzyme was introduced into the mouse genome and the companion recognition sequence was genetically engineered into another mouse gene .

Using this strategy, Jasin performed the first specific genome editing and most importantly, she showed that introduction of a site-specific double strand break into the genome of mammalian cells produced a 1000-fold increase in the targeting of a homologous fragment of DNA to that site. This groundbreaking work laid the foundation for all subsequent gene editing studies, because now it was clear that a double strand break is the critical step in gene targeting for homologous recombination.

Using the methods developed in her lab and now applied worldwide, Dr Jasin also discovered that the two major familial breast/ovarian tumor suppressor genes, BRCA1 and BRCA2, are required for homologous recombination, a finding that explained how the loss of either of these two genes increases the frequency of potentially carcinogenic genetic alterations. The importance of these results cannot be overstated, and they are being exploited in novel therapies for the treatment of breast, ovarian, and other cancers with BRCA1 and BRCA2 mutations, and potentially cancers with mutations in other homologous recombination genes.

Maria Jasin’s research has contributed to the textbook view of how cells survive breaks in their chromosomes, which is critical for the life of all cells. The Shaw Life Science committee is particularly delighted to recognize Dr Jasin as the key pioneer in the revolutionary area of genome editing.

Michel Talagrand is a very unusual mathematician. Of course, everybody who wins the Shaw Prize is unusual, but when I make this statement I am talking about his style more than about the quality of his mathematical achievements. If I had to sum up this style in one word, it would be "tenacious": once he bites, he does not let go.

The following story gives an idea of what I mean. In the 1970s, as a graduate student of the famous French mathematician Gustave Choquet he was given a problem to work on called Maharam's problem, which was posed in 1947. This was a rather basic question in an area of mathematics called measure theory, which deals with notions of size, and it remained stubbornly open. He failed to solve the problem, and moved on to other topics, where he had spectacular success.

But he did not let go. Thirty years later he had a little idea, which made him think that he might be able to produce a counterexample to the statement he had earlier tried to prove, and in 2006 he did indeed manage to do this. As it happened, 2006 was the year of Choquet's death -- I hope he lived long enough to hear about the solution.

The resulting paper was published in the Annals of Mathematics, widely regarded as the top journal in our discipline, and would be a career highlight for most mathematicians. But Michel Talagrand has several even more remarkable achievements, and those are the ones for which the prize is awarded. They are also extremely varied: the phrase "the geometry of probability" is perhaps the best one can do if one wishes to identify a unifying theme. To a non-mathematician it will not be at all obvious what such a phrase could mean, but there are in fact deep connections between questions in advanced probability and more geometric questions about high-dimensional spaces, and Michel Talagrand has revolutionized our understanding of these connections.

Another unusual aspect of his work that illustrates his tenacity is that when he has solved a problem, he does not just set it aside and move on to other questions. He is not satisfied until he has truly understood the solution and worked it into a general method that others can use. This characteristic has made his work even more influential: in particular, it has led him to write three major books that are essential to the research of many younger mathematicians today.

One final aspect of his career that is more unusual now than it used to be is that nearly all his major work has been singly authored: I think this has enabled him to explore radically new directions rather than getting stuck at the same barriers that have impeded other mathematicians.

I would like to finish by quoting from a review of one of his revolutionary papers.

"In this major article, the author proves the Parisi formula. The review could actually stop here!

"First, the Parisi formula is the most celebrated longstanding open problem in the area of spin glasses. Second, the proof presented in the article is self-contained so that, as stressed by the author, its reading does not require any knowledge concerning the underlying physics. Third, a short history of the problem, ideas and developments over the past decades is nevertheless provided for the reader’s convenience or curiosity, so that the interested reader should really download the paper."

I hope this gives an idea of how Michel Talagrand is truly a one-off, and a wonderfully appropriate winner of the Shaw Prize.